If I'm asked what are the best things I've learned academically, I'll answer immediately without hesitation that they are languages (together with the skill to learn something new academically by myself in case of need). In addition to my native language Japanese, I've learned, or at least tried to learn, the following languages in the chronolocial order with different degrees of success: English, Arabic, Hebrew, German, French, Aramaic, Greek, Latin, Esperanto, Yiddish, Russian, Polish, Italian, and Spanish. In my private and professional life I use English, Hebrew, Yiddish, Esperanto, and Japanese actively in this order of frequency, have been working very hard to make my Russian active, and also use Aramaic, German, and French for reading. The rest of the languages are either very passive or almost forgotten.

Though each of these languages has shown me a different new world and worldview and enriched my life, I have to single out five languages that have especially affected my life - they happen to be those five I use actively now both privately and professionally. English and Japanese have enriched me mostly intellectually, while Hebrew, Yiddish, and to a lessor extent Esperanto have done so more emotionally. Now Russian is gradually joining the second group.

So I feel I'm extremely lucky both culturally and communicatively that I and my S/O share more or less the same intellectual and emotional culture, speak Yiddish with each other as our main means of communication with a smattering of Russian, and have several additional common languages, including English, Hebrew, German, and French. If I had been very poor at languages and/or hadn't decided to study these specific languages, this linguistic luxury would have been totally unimaginable and unattainable.

I returned last night from an unforgettable two-week research trip to France and Germany. I spent the first ten and last one day at BULAC, the library of INALCO in Paris, and three more days in between participating in this year's annual Symposium in Yiddish Studies at the University of Trier in south west Germany. I was also joined by my S/O on her own expense.

This trip was unique professonally because this was the first time that the main purpose was not to participate in a conference, whether actively or passively, but to live the life of a scholar in residence, though only for 11 days. I've never spent my sabbatical abroad, but I imagine it must be like this one. It was so nice to work in a different, quiet workplace in a civilized environment away from all the noise. I simply visited no sites of tourist attraction in Paris except for a half-day excursion to the Jewish quarter and Monmartre, my two favorite places in Paris, when the library was closed. I also benefitted greatly from meetings with two colleagues of mine living in Paris - a researcher of Judeo-Arabic teaching at INALCO and a researcher of Jewish onomastics originally from Moscow.

The presence of my S/O enormously enhanced the private part of this trip. We met every evening after our respective work during the daytime and talked about many things without being distracted by anyone and anything else. One of the things I liked best is the fact that we speak Yiddish with each other! Since her French and German are better than mine, I spent these two weeks speaking mostly Yiddish. Except with her and the two colleagues and two good old friends I met (and spoke in English) I had few conversations with locals.

No less unforgettable was our participation in the above mentioned symposium in Trier. I benefitted from it very much, but here again the presence of my S/O who not only knows Yiddish but also specializes in its linguistics increased my intellectual benefit several times. With no relation to this specific academic event it's so nice that I share this and many other research interests with her. We even had brainstorming sessions for conducting joint research projects, which we find is a lot of fun not only intellectually but even emotionally.

PS: Here are three pictures of me dancing a traditional Ashkenazic folk dance, which I studied for quite some time in Jerusalem from one of the few specialists in the world, at a subway station in Paris. :-) 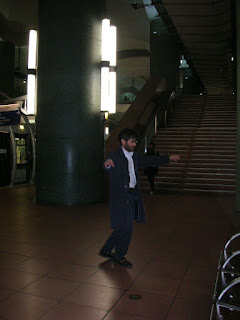 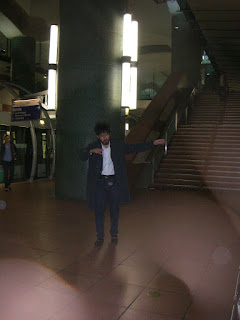 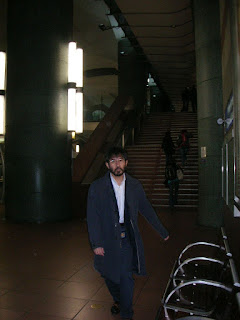 Your feedback, including questions and comments, is welcome by email in English, Hebrew, Japanse, Yiddish, Esperanto, or Russian.